We carry out three-dimensional SPH simulations to study whether planets can survive in self-gravitating protoplanetary discs. The discs modelled here use a cooling prescription that mimics a real disc which is only gravitationally unstable in the outer regions. We do this by modelling the cooling using a simplified method such that the cooling time in the outer parts of the disc is shorter than in the inner regions, as expected in real discs. We find that both giant ( > MSat ) and low mass ( < MNep ) planets initially migrate inwards very rapidly, but are able to slow down in the inner gravitationally stable regions of the disc without needing to open up a gap. This is in contrast to previous studies where the cooling was modelled in a more simplified manner where regardless of mass, the planets were unable to slow down their inward migration. This shows the important effect the thermodynamics has on planet migration. In a broader context, these results show that planets that form in the early stages of the discs' evolution, when they are still quite massive and self-gravitating, can survive.

The balance between the heating and cooling rate determines the stability of self-gravitating discs. In this work we use a straight forward implementation to model the cooling based on the location in the disc. The cooling time is given by 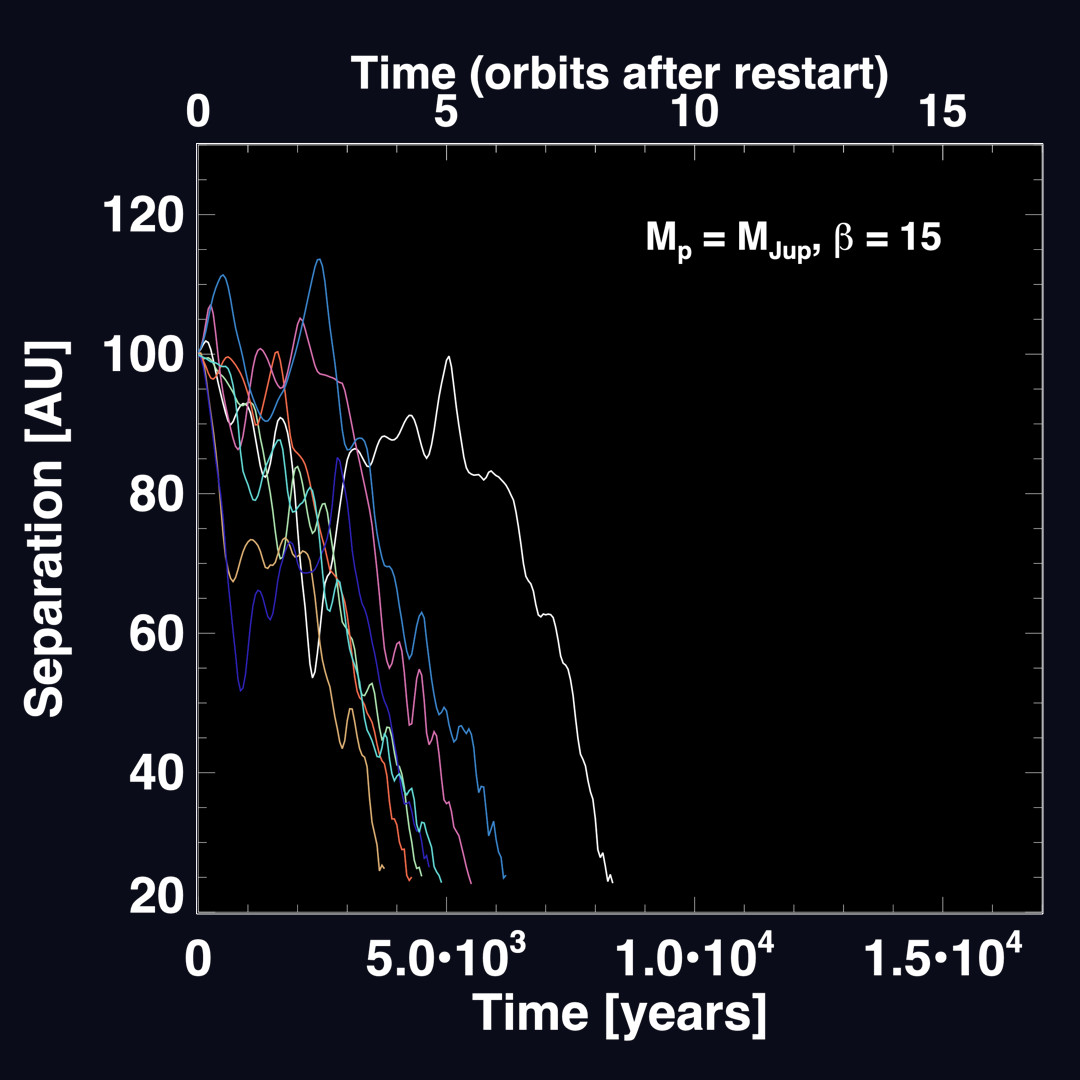 Using a variable \(\beta \) allows us to mimic a realistic self-gravitating disc (see Fig 1b). The longer cooling time in the inner disc results in a gravitationally stable region with very little density fluctuations. The aim of this work is to determine whether planets can slow down their inward migration in the smoother inner disc.

To study the importance of thermodynamics on planet migration, we embed a single planet in the outer regions for both a constant and a variable \(\beta \) disc.

Analysis of cooribital material and torques

The coorbital material around the planet plays a key role in its migration. Initially the planet begins its migration in the gravitationally unstable part of the disc, where the density fluctuates a lot. These fluctuations results in an underdense region forming in front of the planet which drives its inward migration in both models. Since the entire disc is gravitationally unstable with a constant \(\beta \), the corotation torque remains negative throughout and the planet is unable to slow down (Figure 3a). However with a variable \(\beta \), the planet is able to slow down once it reaches the gravitationally stable inner disc. This smoother region results in the structure around the planet becoming symmetric, thus decreasing the negative corotation torque and slows the planet down (Figure 3b).